we deliver WE DELIVER (AND TAKEAWAY)

There are lots of ways for Pizza Guardians to get you your pizza! But no matter how, we want you to know that the health and safety of our staff, customers and communities are our top priority. You can still enjoy your favourite pizza and sides in our stores, takeaway or delivery through Uber Eats, Menulog and Doordash.

If you are Dining In with us you can complete the mandatory form by downloading the QR Code at the store or feel free to complete the form via the link below. 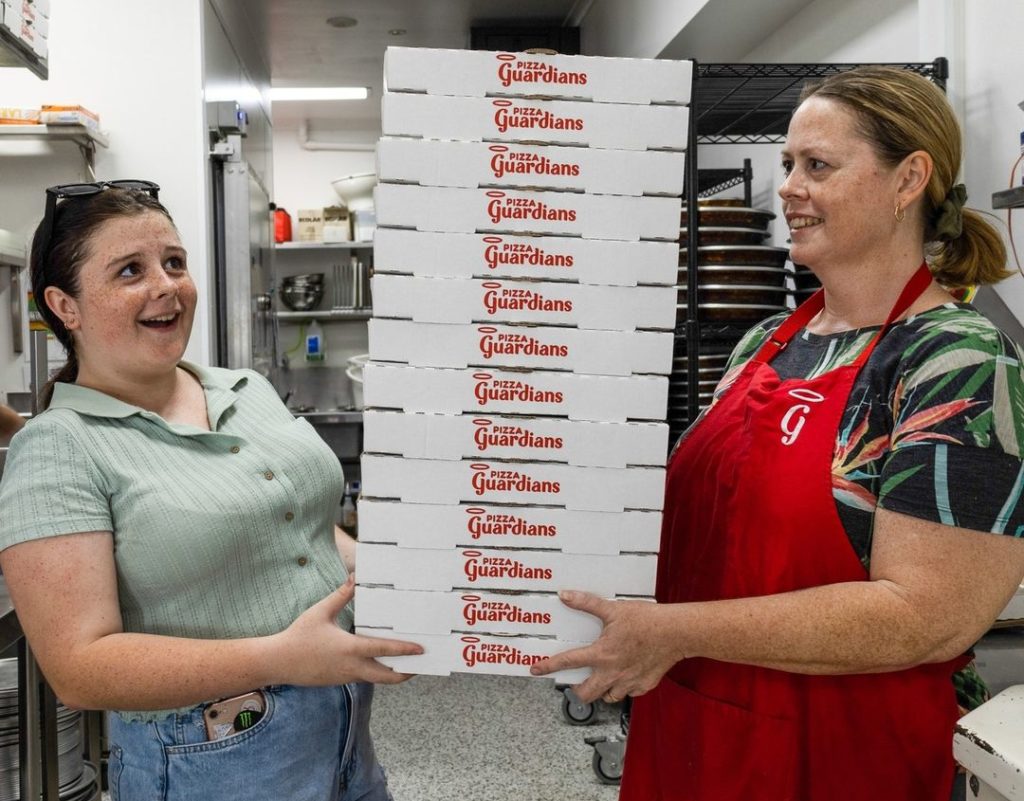 Although pizza originated in Italy, it has transcended time and space (as well as geographical limits!) to become one of the world’s most popular foods. Australia is no exception as pizza is our most popular takeout food. After all, we Aussies eat millions of pizza takeaways per year!

This popularity has resulted in several variants in pizza creation based on regional or national tastes, cultural preferences, and local cuisine. So, what precisely are Australian’s ordering? Luckily in March 2021, Delicious Magazine investigated for us…

Delicious Magazine – Australia’s number one premium food and lifestyle brand – was on a search for the finest local takeaway in the country. As part of the study, they asked thousands of their readers what their favourite pizza toppings are, and the results are pretty controversial.

Except for New South Wales, pineapple was among the top ten pizza takeaway toppings in every state!

In a similar manner, NSW was again an outlier as they were the only Australian state that ranked three seafood toppings from a list of ten – smoked salmon, prawns, and anchovies – in their favourite pizza takeaway topping. Maybe this love for seafood is because of their beachy lifestyle? Or simply having a great seafood market?

Chilli was also among the top five toppings for pizza takeaway in New South Wales, which is kind of a testament to a more refined palate as they were the only states to have prosciutto in their top 10.

Over in South Australia, their passion for old school Italian or ‘genuine’ Neapolitan pizza led them to choose classic toppings all the way – salami, mushrooms, olives, anchovies, and prosciutto among their favourite pizza takeaway toppings.

South Australians can’t resist a cheeky Hawaiian pizza takeaway, as no other state placed these two major ingredients of a Hawaiian pizza quite as highly with pineapple third and ham fourth.

For years, pizza takeaway lovers have debated whether the acidic fruit should be used as a topping. Whatever the outcome of this heated debate, it’s apparent that we Aussies adore our Hawaiian pizza since who doesn’t enjoy a double smoked leg ham on pizza?

Northern Territorians included pineapple and bacon among their top five pizza takeaway toppings. They enjoy mozzarella and salami on their pizzas, too, but no state – not even Queensland – placed pineapple on a pizza higher than they did.

Some may attribute the high ranking of pineapple, bacon, olives, and anchovies to Darwin’s closeness to Southeast Asia or palates educated by sweet, sour, and salty delicacies at markets like Mindil and Rapid Creek.

Tasmania’s choice of toppings clearly identified them as the fun-loving wildcards. Smoked salmon is second on their list of favourite toppings, far ahead of any other state. They are also the only state that rates sweet pizza takeaways, with white chocolate coming in third.

Tasmanian pizza fans finish off their top five with vegemite and pineapple, demonstrating an adventurous, free-thinking streak capable of pairing vegemite with hot pizza dough rather than hot toast.

The Australian meatlovers pizza we know today differs significantly from the original Italian pizza, which was entirely vegetarian, consisting of garlic, mozzarella, basil, and no sauce. Instead, the Australian twist is slow-cooked tender beef, smoked ham, pepperoni, topped with mozzarella and served on a southern-style smoky BBQ sauce base.

In particular, the best seller at our pizza shop Caloundra has always been the meatlovers which is basically a pizza with all-you-can-eat meat! Our pizza shop Caloundra provides high-quality ingredients, simple yet authentic Italian flavours, and is served fresh and sizzling hot, leaving you singing “that’s amore.”

Queenslanders are also unique in that they are one of just two states that believe prawns go on pizza and are the only state where olives rate a podium finish.

Victorians would also be pleased with a meatlovers pizza, as their favourite toppings are mostly meat, with ham coming in second, salami/pepperoni third, and prosciutto fifth.

Our Pepperoni pizza at Pizza Guardians is hard to top, with its stringy mozzarella cheese and crispy meat layered over a tomato sauce foundation. Pepperoni is an American cured salami that first appeared on pizza in the US and has been a popular topping ever since.

Victoria is the only state where anchovies did not rank among the top ten favourite pizza takeaway toppings. Instead, they ranked eggs very high…

Victoria was the only state that thought an egg on a pizza was a good idea, with ham and bacon (#8) in their top 10 toppings. Our Aussie Pizza at Pizza Guardians features signature tomato sauce, mozzarella cheese, bacon, onion and topped with two fresh eggs, the perfect pizza takeaway for breakfast, lunch, and dinner!

The National Pizza Toppings of Australia

Overall, what would it look like if we combined Australia’s top five toppings and put them on a pizza?

Overall, the margherita pizza, with its toppings of fresh tomato, kalamata olives, oregano, and mozzarella cheese, outranked all other pizzas to become Australia’s most popular pizza takeaway option. Primarily regarded as the first pizza ever created, the tried-and-tested margherita pizza was created in 1899 and continues to dominate as Australia’s most popular pizza takeaway choice.

Since pizza takeaway is such a popular choice for many, the market is saturated with new pizzerias and pizza restaurants popping up almost every week! Which makes finding the “best restaurants near me” difficult.

Luckily, no matter your personal pizza tastes, Pizza Guardians is the end of your search for the best pizza place in Brisbane. Pizza Guardians makes pizzas with the freshest gourmet ingredients and deliver the best value.

From our pizza shop Caloundra to Morayfield, each pizza shop maintains quality, consistency, and great value for money. Delivering freshly prepared pizzas and side dishes piping hot to your home. So, you can dine like you’re in Italy without ever leaving your house!

Each Pizza Guardians’ pizza place takes great pride in producing delectable simple pizza using only the freshest ingredients. From pepperoni pizza to margherita pizza and much more, our menu is fantastic, with a wide range of selections to suit all dietary needs at reasonable rates.

Pizza Guardians will make your life easier pizzas are the original large 12 inches and are all the same price EVERY DAY.

Confirm your location when ordering